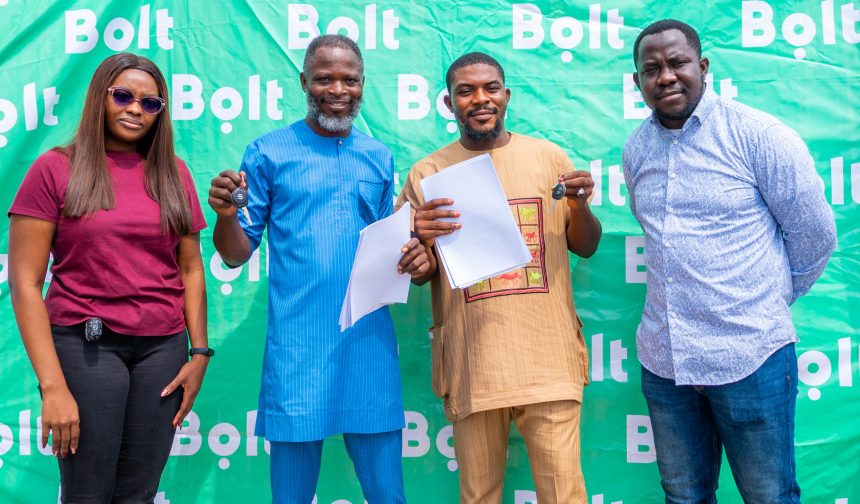 In its 3rd edition, the competition celebrates top-performing drivers on the platform with unique rewards.

Leading mobility platform, Bolt, rewarded two drivers operating on the platform with brand new cars in the recently concluded Driver’s League Challenge. The 3rd edition of the competition, held for eight weeks, rewarded drivers in Nigeria with prizes worth an overall value of N20 million, including brand-new cars and various home appliances.

Launched in 2020 in recognition and appreciation for service excellence, Bolt Driver’s League Challenge celebrates top-performing drivers on the platform. In addition, it showcases Bolt’s commitment to advancing and easing mobility in Nigeria while supporting drivers with extra earning opportunities.

Congratulating the drivers, the Regional Manager for Bolt in West Africa, Ireoluwa Obatoki, said, “We congratulate the winners of this year’s challenge and appreciate their dedication and loyalty to Bolt and its riders. Bolt recognises and cherishes the essential role drivers have played in expanding our brand in Nigeria and ensuring the continued sustenance of our operations. Through our Driver’s League Challenge, we are building a community of drivers dedicated to delivering the utmost service quality. We use this as an opportunity to celebrate their hard work and efforts throughout the year. We remain committed to the welfare of our drivers and promise to continue introducing initiatives that will improve their overall experience.”

The 2022 Bolt Driver’s League competition was divided into the Premier League and Championship League, which catered to existing drivers on the platform, and the Rookie League, dedicated to new drivers. Drivers were evaluated by unique criteria, including finished trips, online hours and maintaining a high driver score at the end of the eight-week campaign. Eligible participants were given goals in the form of rides finished and ratings by riders to qualify to win tokens towards the prizes. Drivers who had accumulated enough tokens were entered into a raffle draw which determined the winners. The challenge recorded outstanding participation nationwide and saw Ajibade Ademola from Lagos, and Kazeem Shehu from Abuja emerge victorious in their respective categories.

Expressing his excitement at winning the Premier League and being awarded as the Overall Top Driver in Lagos, Mr Ajibade Ademola graciously thanked Bolt for the initiative, “When I got the call that I had won, I was so happy that I shouted and called my family to celebrate. I thank Bolt from the bottom of my heart; only God can reward them for this. This is the first time in my life I am the owner of a brand-new car, so I am very grateful. My birthday is in four days, so this is the best gift I could receive from anyone.”

Mr Kazeem Shehu, who triumphed in the Championship League, also appreciated Bolt, saying, “I appreciate and thank Bolt for their work and this reward. My vision in life has always been to become a transporter and open a company of such. I want to help others as Bolt helped me, who just joined their platform four months ago. This win has proved that destiny can only be delayed but not denied. My appreciation to Bolt is not just because of the car, but because Bolt has allowed me to be my own boss”.

Since its yearly driver reward campaign in 2020, Bolt has rewarded drivers with brand-new cars worth over N50,000,000, over N1,000,000 worth of fuel vouchers, household appliances, gift hampers and other gifts worth millions of naira to participating drivers.